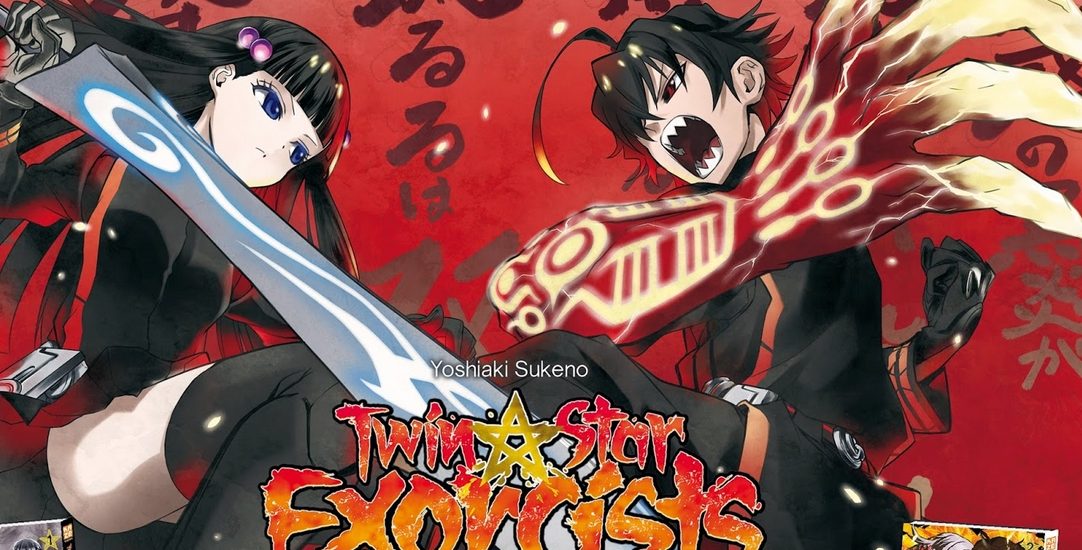 Twin Star Exorcists is one of those animes you dismiss at first glance, thinking that it won’t be any good but you keep the anime in the back of your mind because maybe, just maybe it won’t be as bad as you expected.  Then one day I was bored and decided to try watching this anime and became hooked, it was a lot better than I expected based on the series explanation and art that I saw.

The anime is about Rokuro Enmado is a young boy who used to be a powerful aspiring onmyouji aka exorcists, before a tragic incident left his friends dead and made him abandon the profession. One day, he has a fateful encounter with Benio Adashino, a girl around his age and a well-known onmyouji from the east.  The two get along like water and oil but at the same time, they share so much commonality that it is startling.  Then one day Arima Tsuchimikado, the leader of all onmyouji declares them the Twin Star Exorcists, the people who will marry and give birth to a child who will end the 1000-year war with the Kegare, aka the evil spirits the onmyouji purify.  As you can imagine, Benio and Rokuro are not pleased and they will have to balance battling Kegare and being forced together by Arima in an attempt to produce the promised child.

Twin Star Exorcists anime style takes some getting used to, especially bothersome to me is the shark-like teeth that Rokuro has.  The anime uses a heavy art style with dark, bold lines that tend to be better served for background imagery instead of action sequences.  The animation is good enough but occasionally will have a few character deformations during the action sequences but all in all the animation and art is forgivable due to the well-done characterization.  The plot is mostly cookie cutter but the characters and their interaction are what makes the series go and the series is well worth watching due to this.  Watch it, Twin Star Exorcists is the sleeper hit of the anime season.