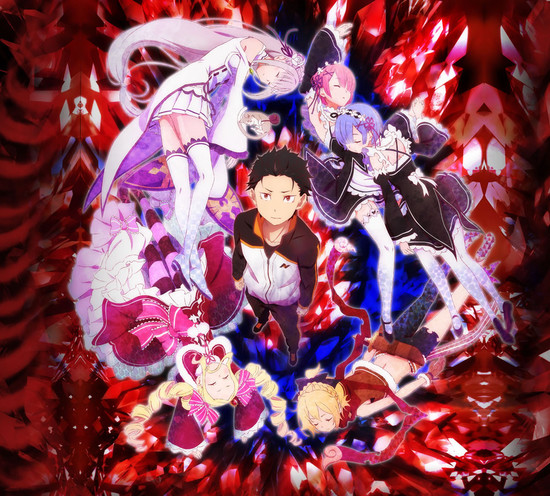 I have a confession to make, one of my favorite anime’s of this current season is Re:Zero.  Re:Zero genres seems to be in the fantasy, action, comedy, adventure and romance category’s though I am starting to see little hints and teases of a harem in it.

The story begins with Natsuki Subaru, just your average and ordinary shut-in aka NEET when one late night he decides to go buy food at a convenience store, after buying food he starts heading home only to literally walk into another world, a world of fantasy.  Stuck with no way back to Earth, Subaru begins his adventure in this other world with seemingly no special abilities granted to him and no idea of what to do.  Subaru quickly finds out that almost everything he has or owns is useless and soon after he is even assaulted by a group of robbers, only to be saved by the main heroine of this series, Emilia.  Feeling grateful, he decides to help her find her stolen badge and following several clues they find the thief, only to be killed in an ambush.  Subaru suddenly finds himself once again transported to the moment he arrived in this new world, hence begins the anime of Re:Zero as we follow Subaru’s adventures with his cheat ability, an ability that should be called Auto-Save.

The animation of this series is really well done so far, no obvious deformations or cost-cutting measures seen.  The design of the characters is very good, their personalities are distinct and the world building is great.  The plot is interesting and intriguing with another plus being that the anime is taking the time to allow us to connect with the characters, even the side characters.  Re:Zero is definitely one of the highlights the current anime series and is a must watch.