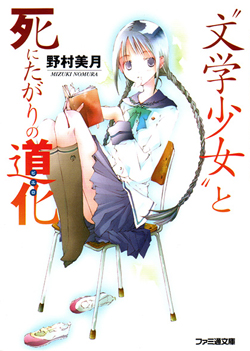 The Bungaku Shoujo aka Book Girl series is very popular in Japan.  As with most things, once the book series ended its popularity slowly waned, but to a connoisseur of books this series is great.  The Book Girl and the Suicidal Mime by Mizuki Nomura will be the first book released of this series in the US.  With the title and reading the back cover of the book you would think that this is a story about Tohko Amano, the eccentric and charismatic self-proclaimed ‘book girl’, but it’s actually told from the first person perspective of Konoha Inoue, her long time suffering chef *cough* I mean writer.  Each book in this series uses modern-day classic’s as its theme, in this case, it’s No Longer Human by Osamu Dazai. No Longer Human is a dark, depressing story about a troubled man incapable of revealing his true self to others and instead puts up a facade, but someone finally sees’s through that facade.

The book is a deliberate mix and match of genre elements and within the first half of the book, you are left wondering what’s going on, but that is actually the whole point.  This book is from the perspective of Konoha Inoue, fatally flawed and apathetic high school boy who uses sarcasm as a shield to protect himself.  Inoue doesn’t know what’s going on himself and we are seeing it from his perspective.  The story thrives on its interesting characters and an ambiguous narrative that ends up leading to, seemingly, a muddled mid-story.  In the mid-story, interesting characters are introduced only to be reduced to the background and the story just seems to have so many loose threads that it will be impossible to wrap up in the novel.

The end of the novel is coming and somehow it’s going to end on a boring and boilerplate whodunit climax?  Hardly, this is the magic of the Book Girl series and one of the reasons why it’s so popular because what you thought was the ending, actually wasn’t. All those loose threads and background characters come back into focus and are beautifully wrapped up in the climax leaving you wanting more.

It’s a pity that with such a book that there is a flaw, the flaw is in its English translations.  The Japanese language has more ambiguous meanings and different readings than English.   Unfortunately, Bungaku Shoujo was written in such a way as to use those different meanings to add depth to the story.  English translations of this novel are very hard due to this.  While a sentence in Japanese could be read to have 3 or more meanings, in English it would only have one.  Because of this, the English translation reads almost like a telegraph, with short and simple sentences that lead to the subtleties of original being lost.

This book is one of my favorite light novels of all time.  Buy it, even with all the English translation warts, it’s one hell of a ride.